Heh, so I suddenly wanted to cook on one of my off-days.

These were the recipes that I followed:

Verdict: I thought the snow pear soup was a success. The potato and minced pork dish can have some rooms for improvement – less oil and also more skills required 😛 Also, I “free-styled” a vegetables dish.

Let me walk you through the process 🙂

So I just got back from my shopping… 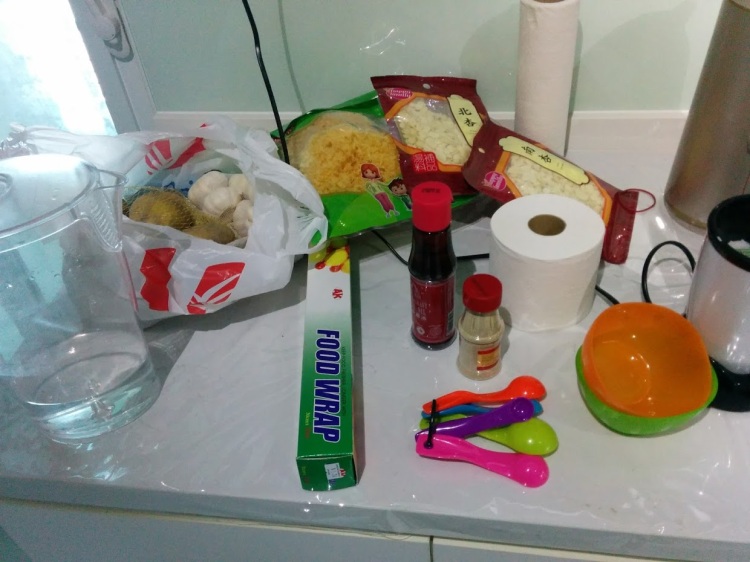 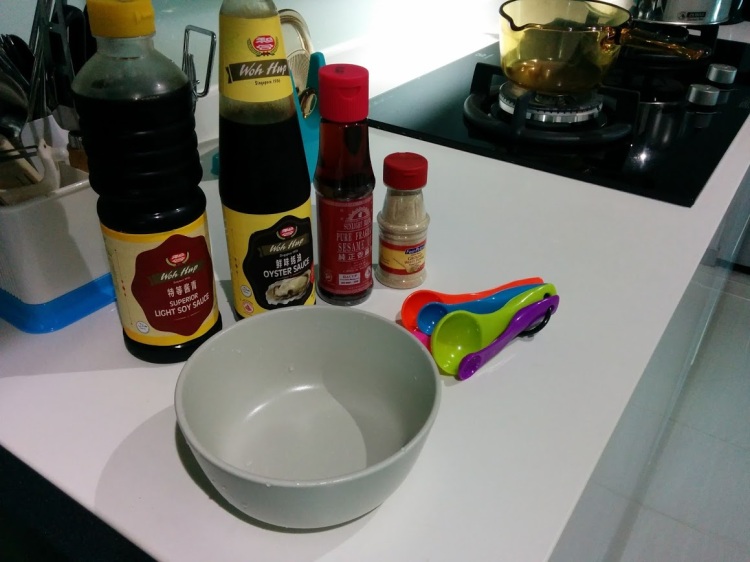 Let’s marinate the minced pork first. I used my trustworthy spoon to help me with the marination. 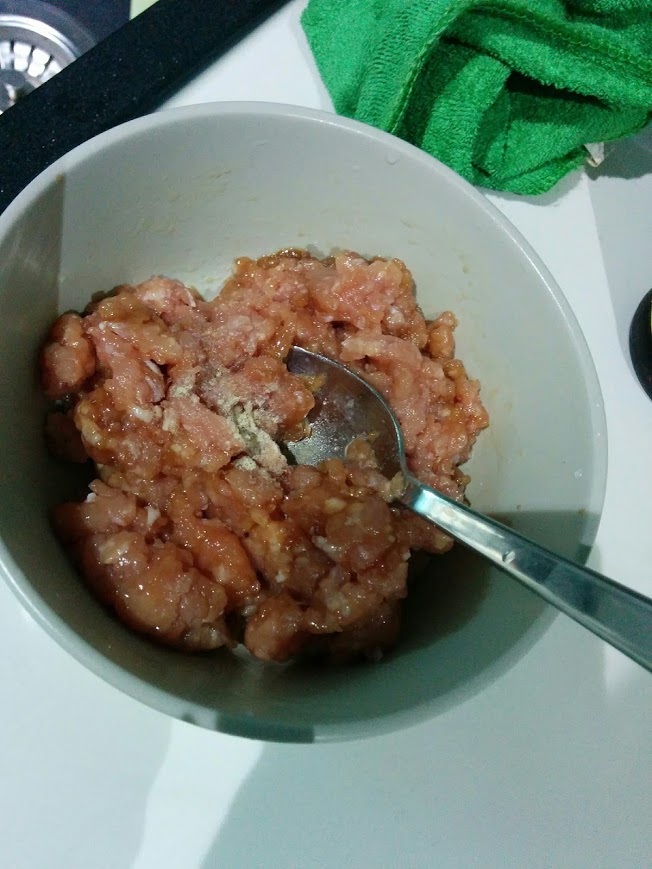 And I wrapped it up after seasoning and “mixing”, to the fridge. P.S. I think the recipe didn’t tell us to do this? But I did it anyway coz it’s weird to leave the raw pork in room temperature? 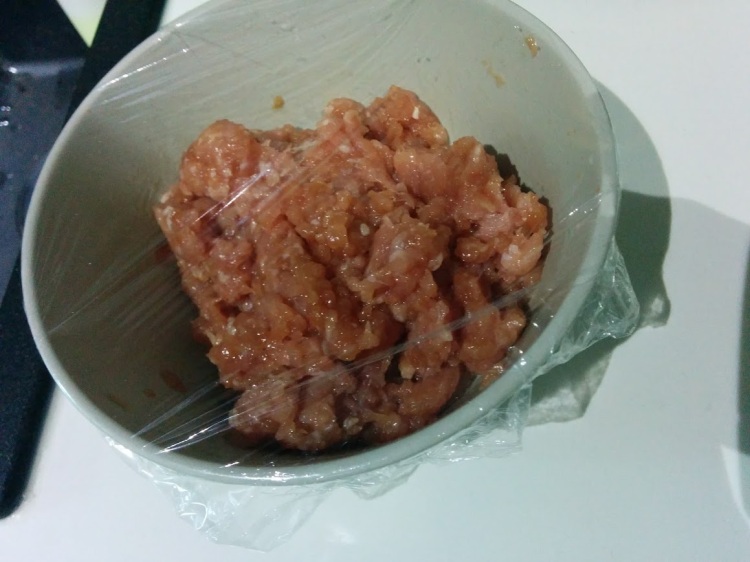 Then it’s time to weigh the white fungus. Woah, it’s really 2 huge pieces lol. And I have a scientific weighing machine with me here.

The kitchen scale that I bought previously buay zhun one. 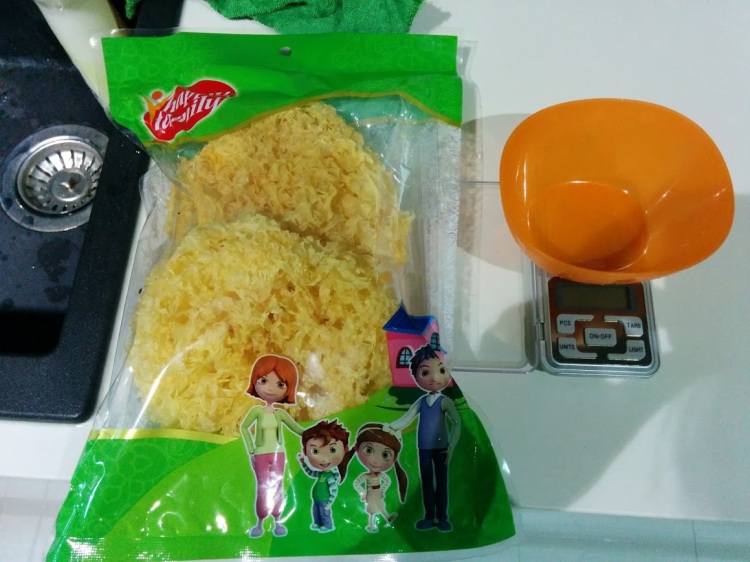 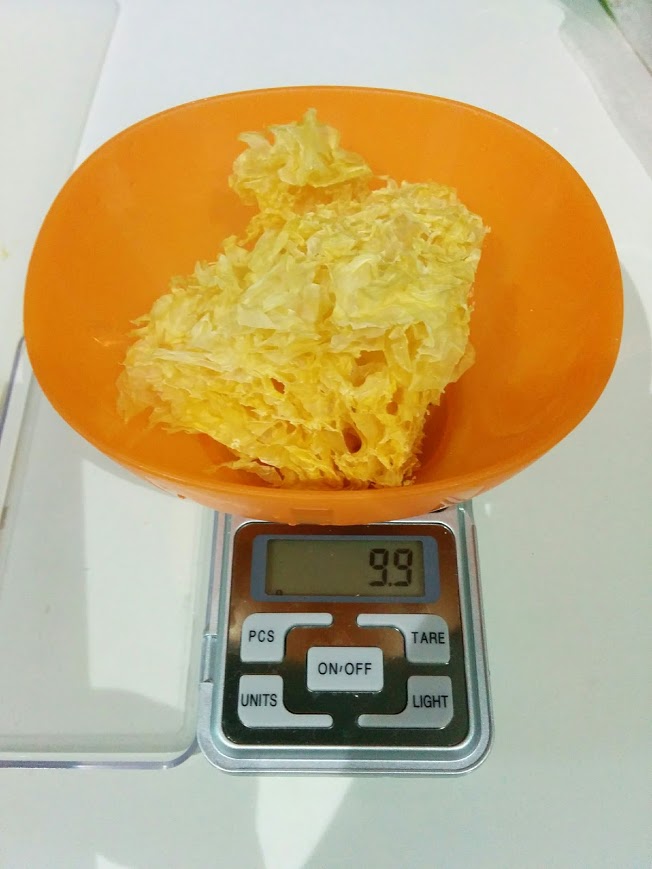 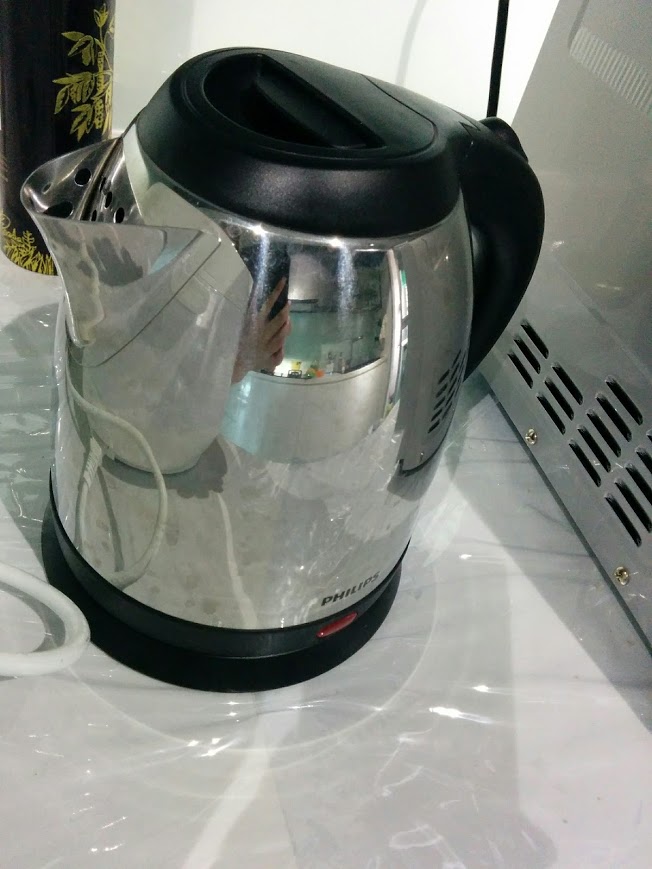 While waiting for the water to boil, let’s check out the ribs. 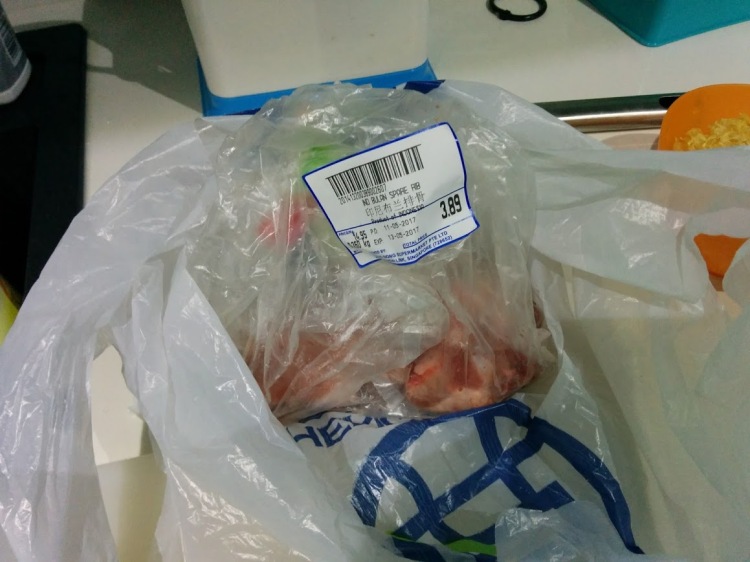 Told you that my boiler is fast, so I filled it with some boiling water + any other water that I can find in the house. Haha, from my pitcher la. Let’s wait for the white fungus to growwww… 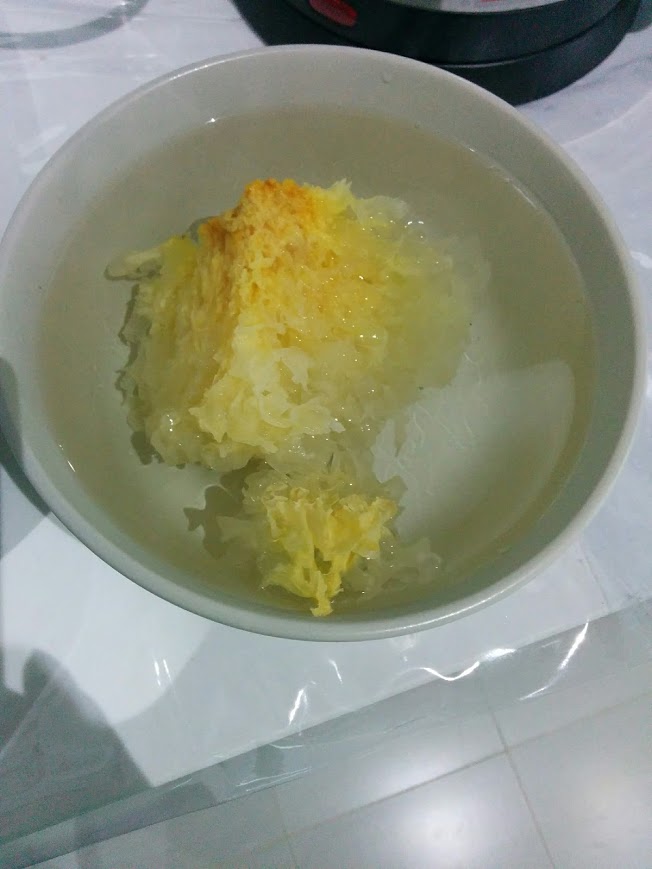 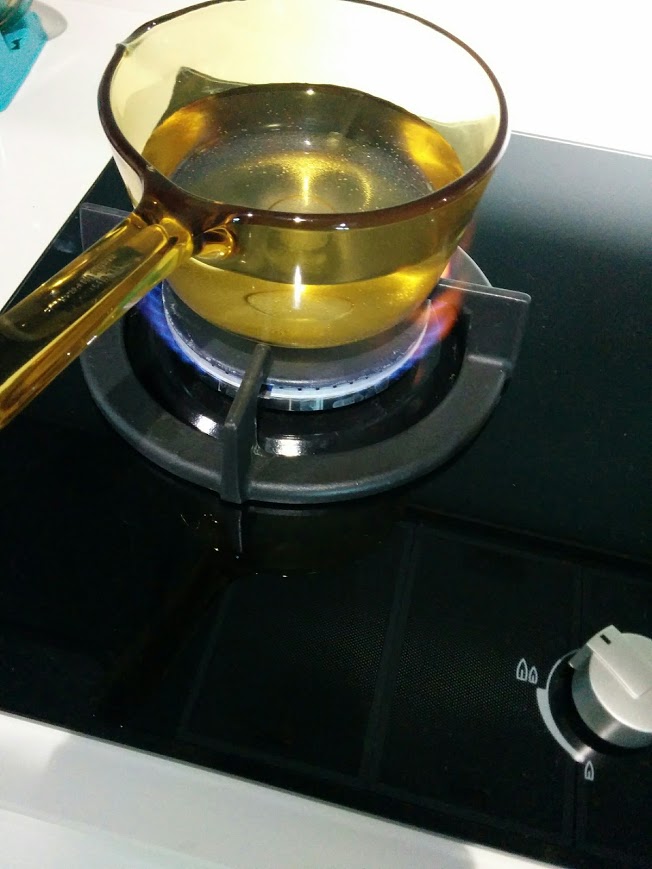 And I chopped the ribs further into smaller parts using our one-and-only kitchen knife as you can see in the picture below: 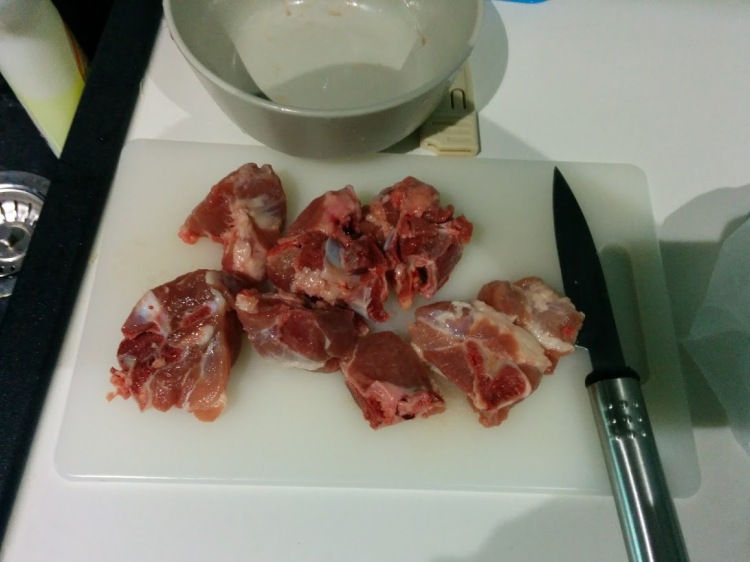 Then I threw the ribs into the pork and move on to the next item – PEARS! It’s peeling time~ 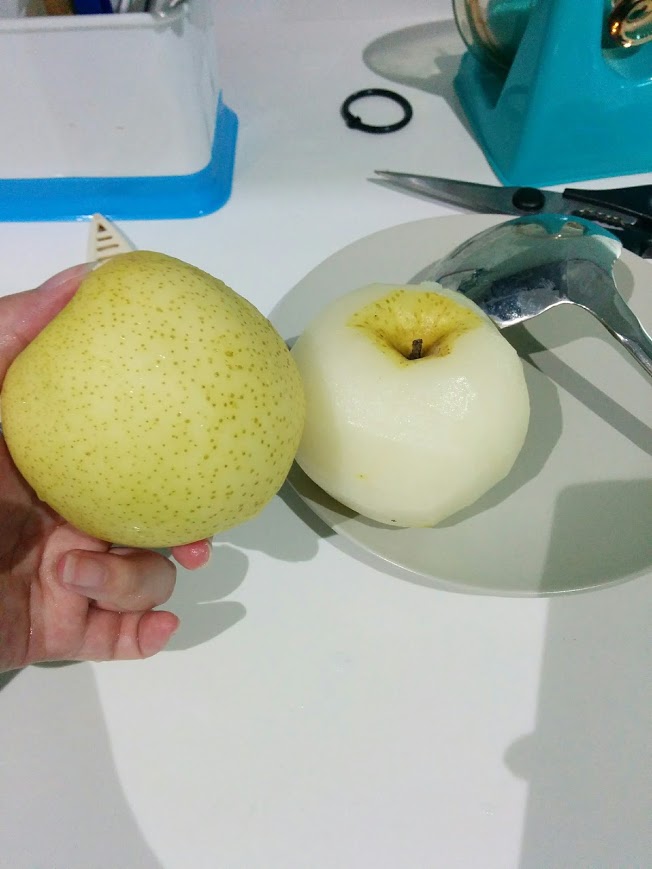 The shapes aren’t consistent… But who cares right? It’ll eventually shrink when it boils 😛 I deliberated if I should throw in the “korean” pear on the right.. Eventually I did, coz I’m greedy lol. 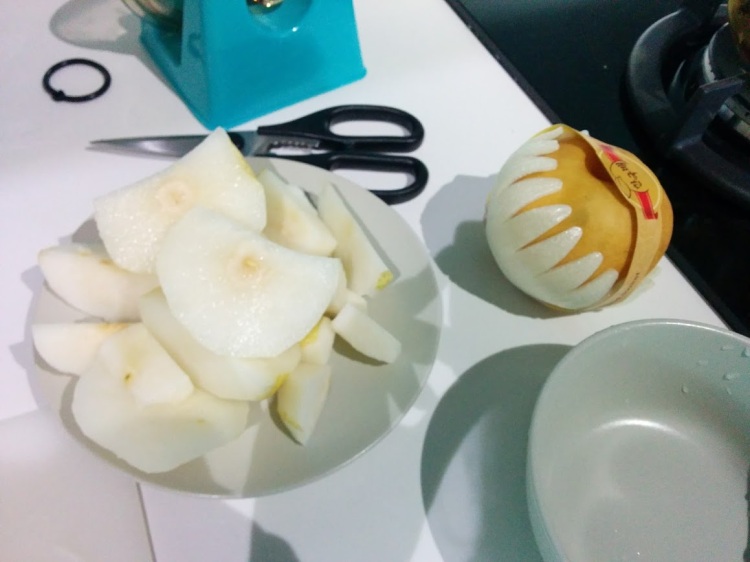 Ok, recipe says 1.2 liters of water. Hmm, I don’t know how to agar, so I used this 1.5 liters bottle to help me with my agaration. 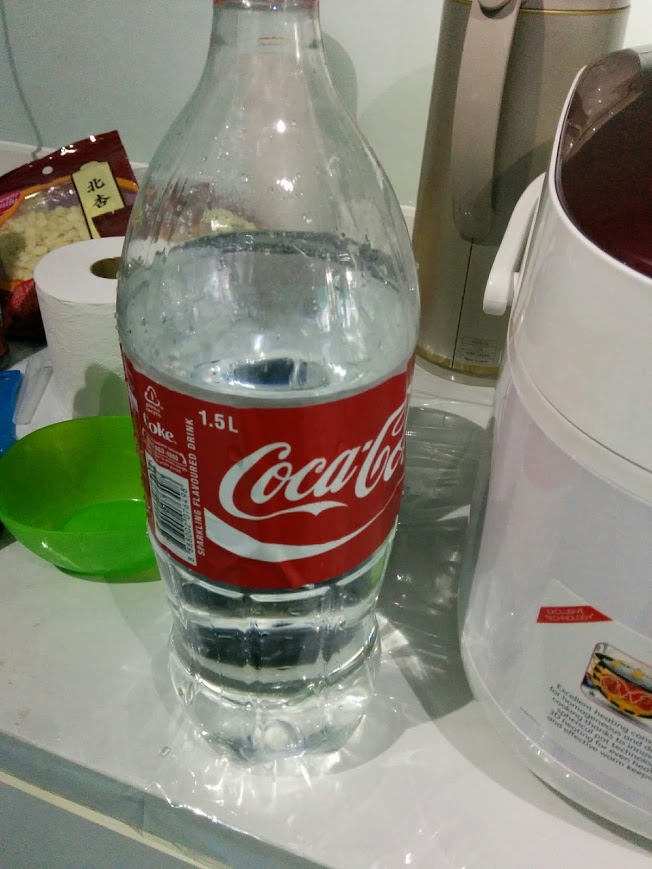 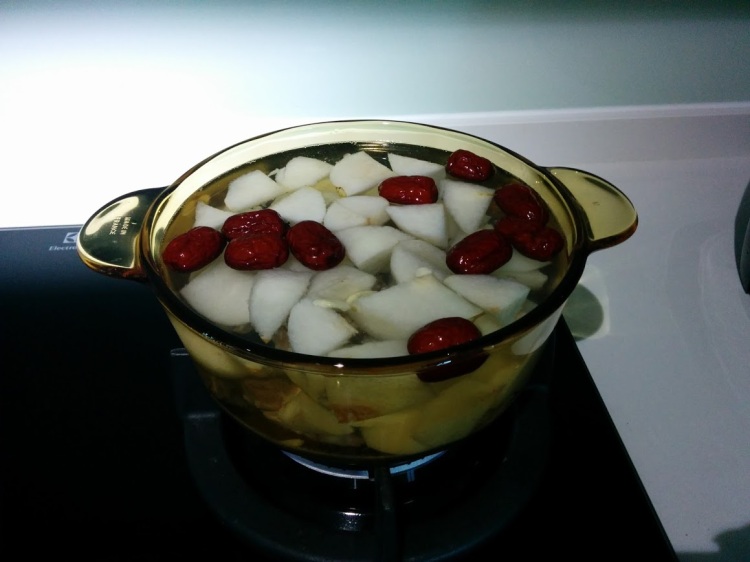 And it starts to boil, and omg, it’s super full! How am I going to add the white fungus? I think the recipe instructs to close it partially with a lit, but I skipped that as I wanted more to evaporate so that I have space for the 10g of white fungus 😛 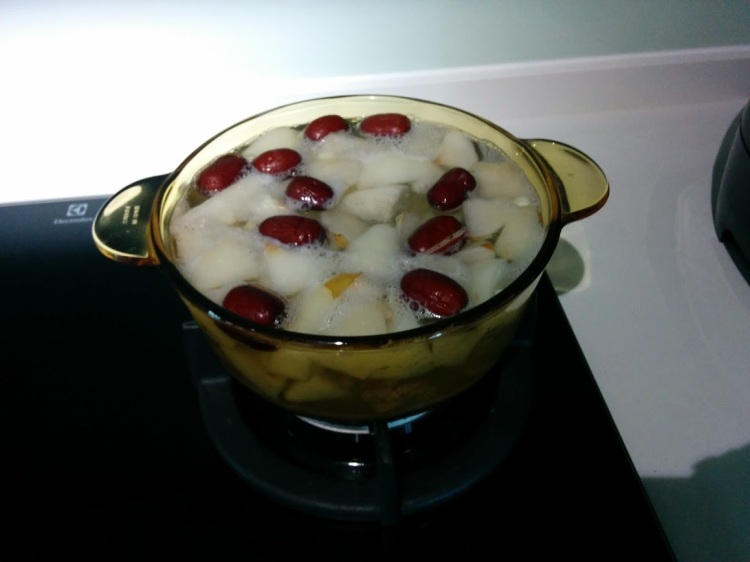 Meanwhile, I moved on to potato! It says only one potato. 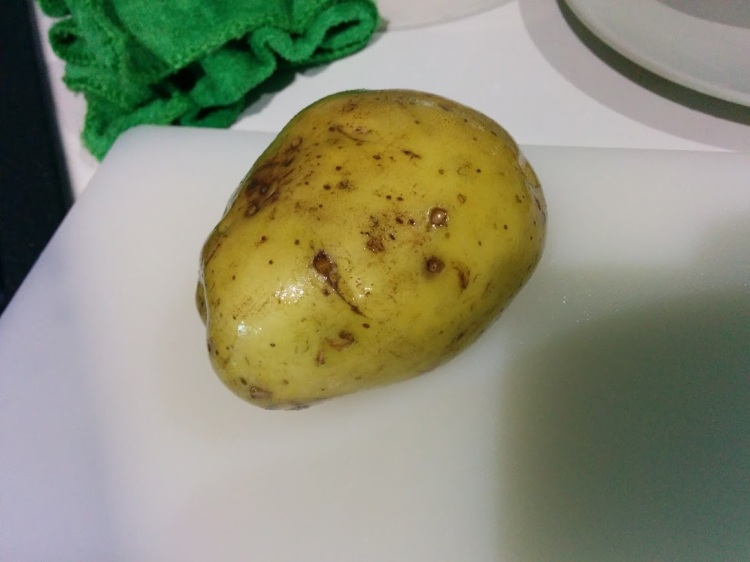 Ta-da! Again, luan luan lai for chopping… Which isn’t good coz instructions said to make them equal in terms of height. Let’s see what happens next 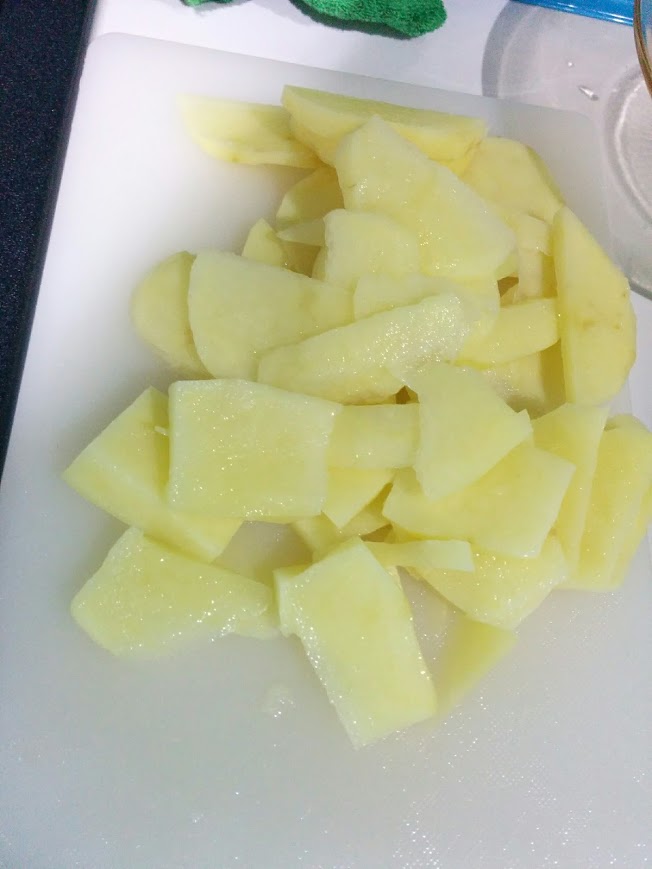 Managed to squeeze the white fungus in, heng ah!

And will set this slowly to boil and boil. 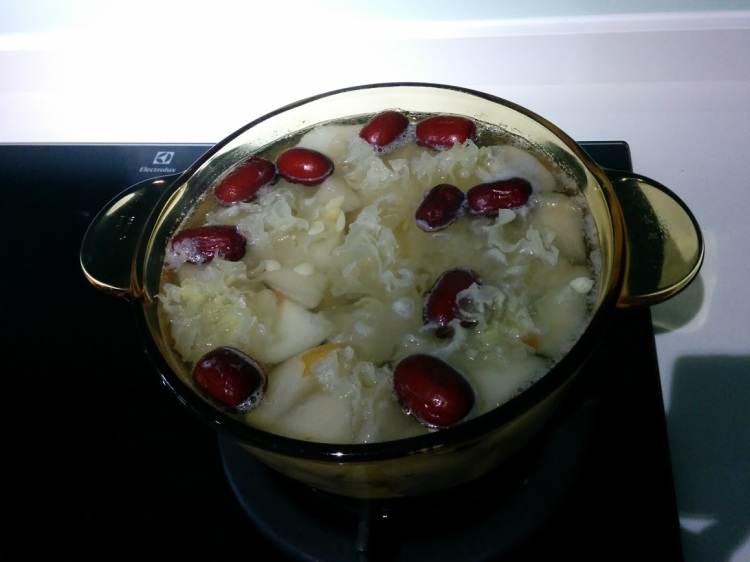 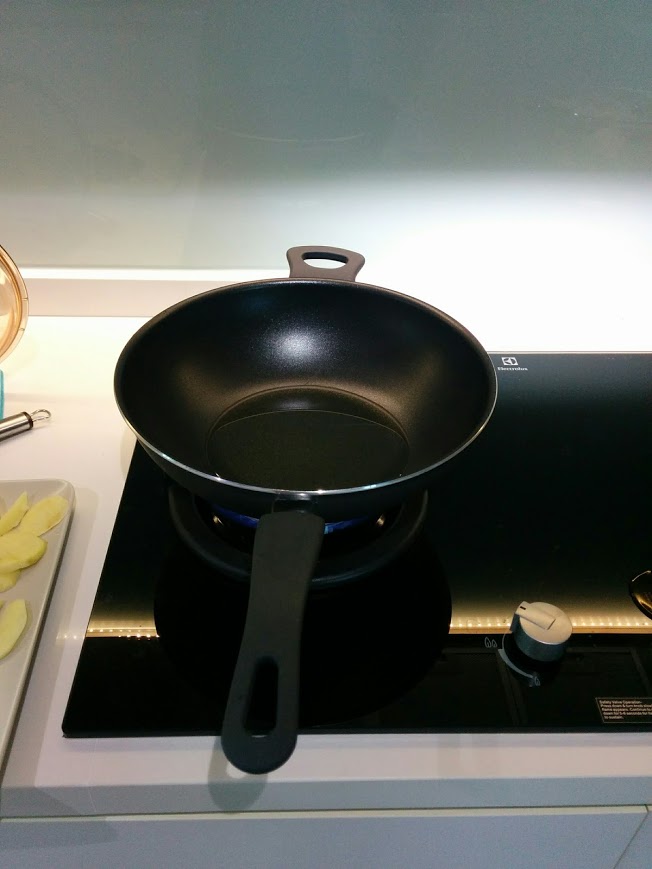 Noob trying to oil-fry things for the first time. Errmm, seriously, too much oil. And I’m not sure when is medium heat too. So I just threw the potatoes in when I feel like it. 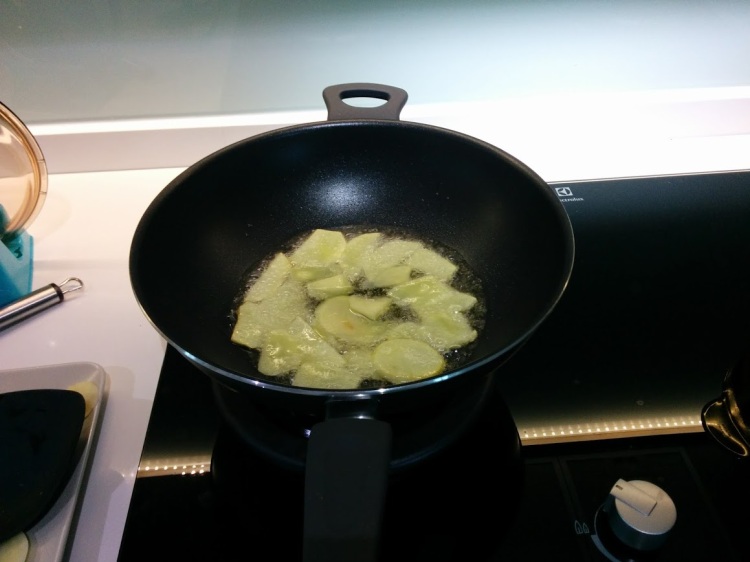 Then some of the potatoes became chao-ta. Coz too thin, and some not sure if cooked or still raw. Then I thought over-cooked is better than under-cooked. And I drained the oily potatoes out, poured away some of the oil and threw in the marinated pork. 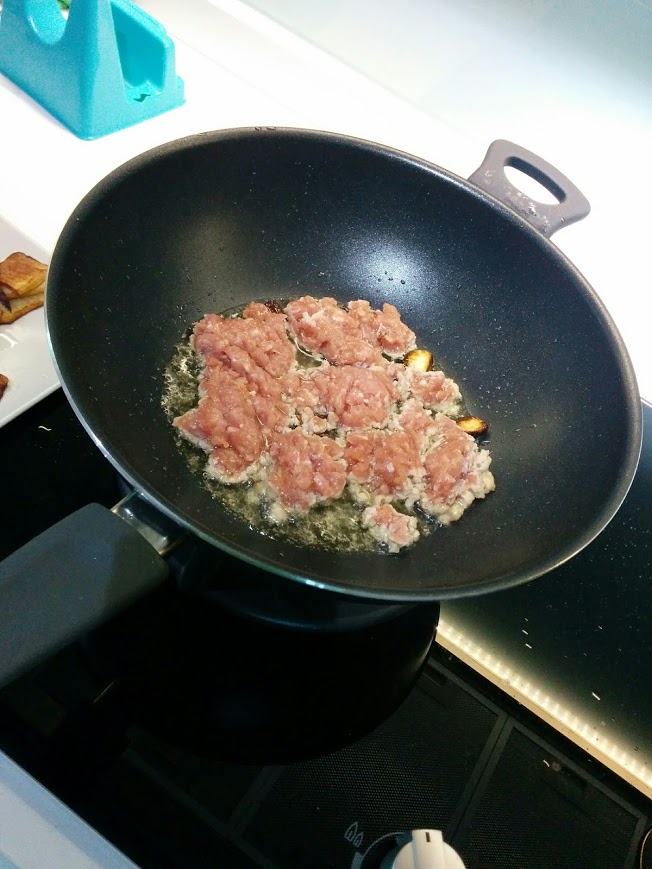 Um, I’m  pretty sure the pork are quite finely chopped in the recipe. Mine seems to be in clutters lol. And take a look at the burnt potatoes 😥 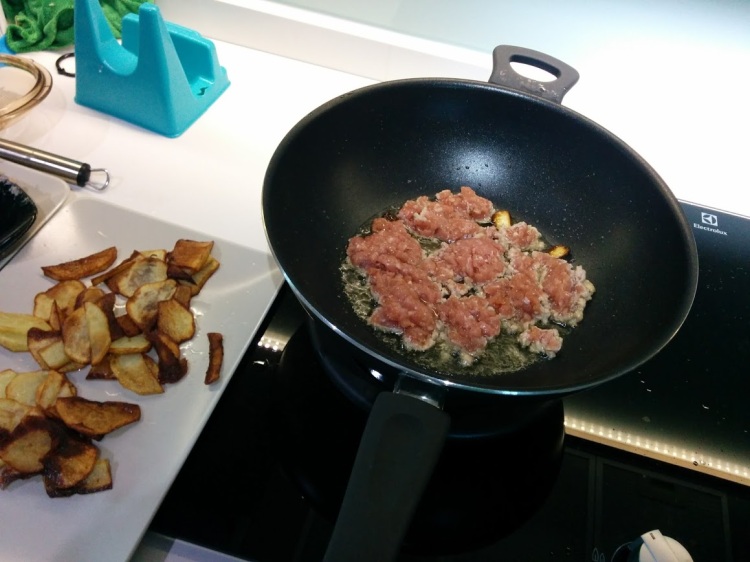 Omgee. Super oily! And I realized that Dark Soy Sauce wasn’t available, so I used Light Soy Sauce in place of that. No wonder the color looks different hor. 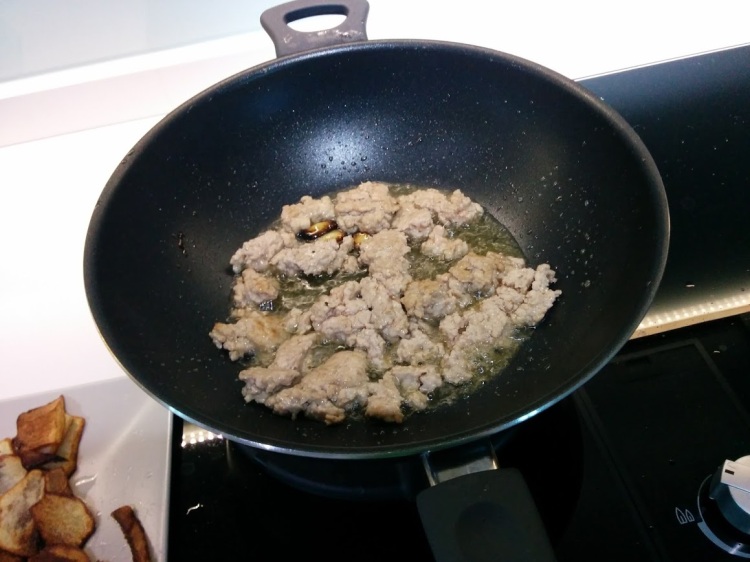 Threw in the potatoes and let it “sit” for a while… 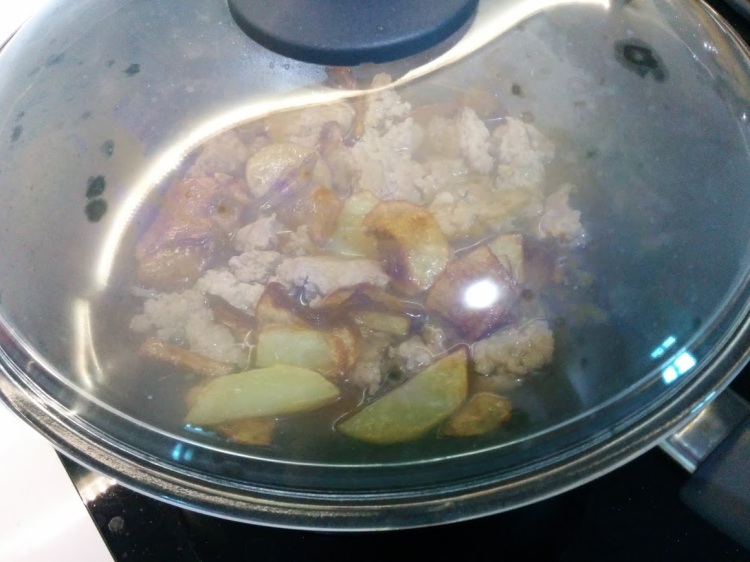 Then comes to my “free-style” dish. I used one table spoon of oyster sauce with water. And this is nai bai with carrots. Oh, I threw in half a bag of white oyster mushrooms too. 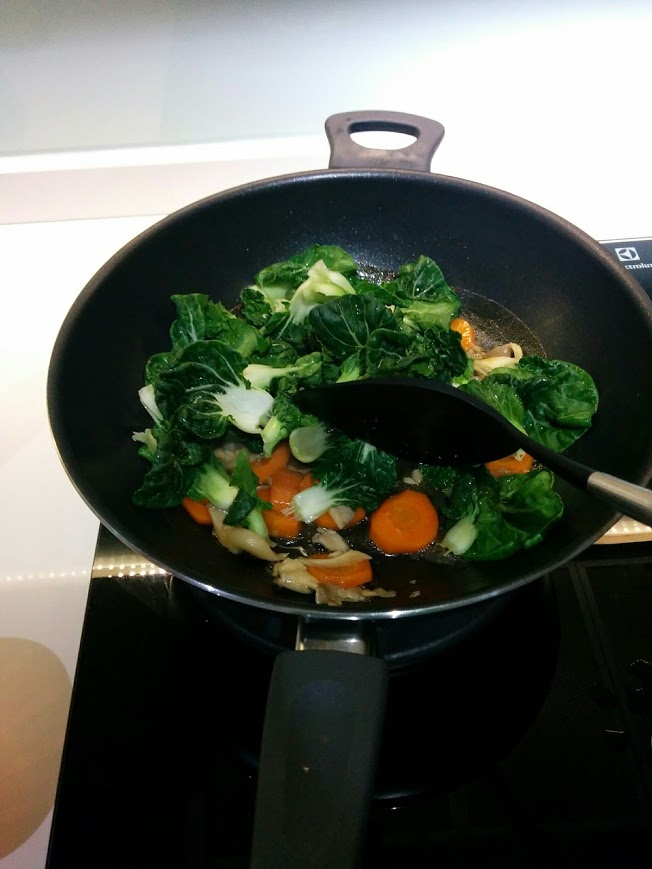 Hmm, it’s nice 😛 Not too salty and oyster-ish. 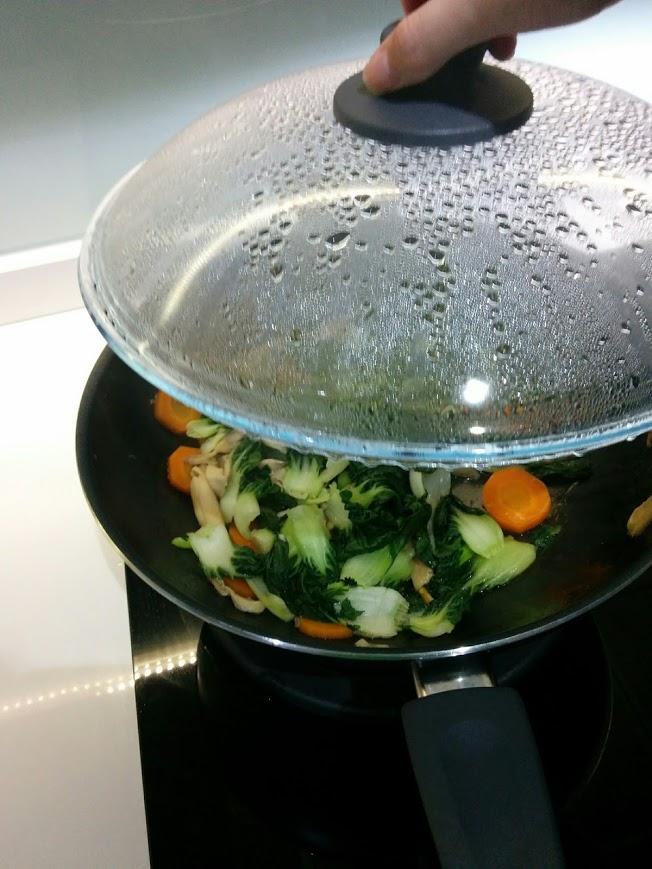 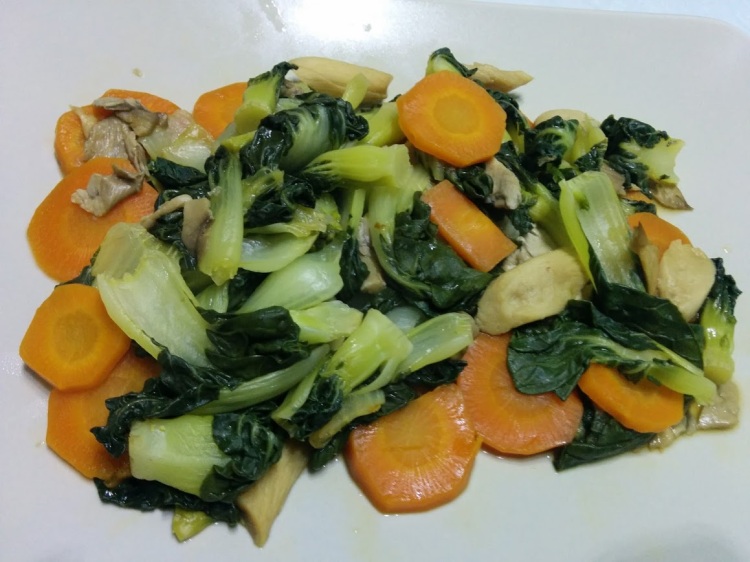 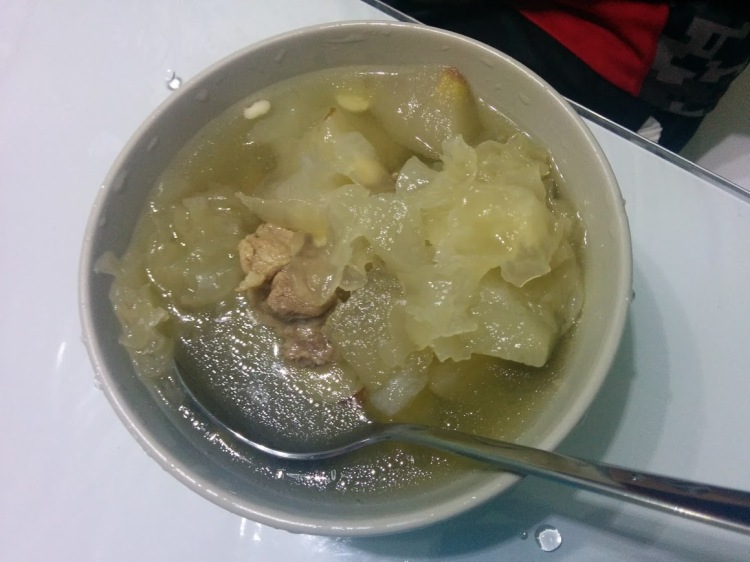 We had a great time eating. But not washing lol =x

My current thinking? Cooking is fun, if only it’s once in a while. The preparation and after-work is quite siong. I think I spent 3 hours cooking these and Simon spent 30 minutes to an hour washing up.

I’m not sure when is the next time I’ll cook but this is definitely a great experience! 🙂